Group exhibition Credible Thread features artworks inspired by textiles. Needles slip in and out of canvases; attire is magnified; wire mesh is sculpted as fabric; and patterns that mimic weaving and patchwork captivate. The common thread in this exhibition is the idea of threadwork as artists consider the repetition in producing fabric, and how patterns emerge to form shapes. At first, threads seem thin, but as more and more come together, they grow both in dimensionality and meaning.

A strong narrative runs through Susan Washington’s autobiographical work, which incorporates textile, thread, and vintage paper into her painted collage works, producing surfaces layered with textures, rich colors, and expressive line work. Her influences include the work of the early Synthetic Cubists, Abstract Expressionists, and the St. Ives School. Her recent paintings toy with disaster and celebrate unexpected results from spontaneous action and sometimes unpredictable techniques.

Working in both an additive and reductive process, German artist Petra Rös-Nickel builds and removes layers from the surface of each canvas to present panes of color that appear in both the foreground and background. This manipulation of space through color challenges the viewer’s perception of depth. Her work can be put into different visual categories such as “patchwork”, “windows” and “oscillating lines”. As much as the groups may differ in their aesthetic expression, the artist‘s distinctive characteristics and methods remain cohesive.

Experimentation with different materials, textures, and techniques in each of Barcelona native Raul de la Torre’s paintings has been a point of discovery and a major part of his work. In his Fils I Colors series, he operationalizes the third dimension using different materials together such as embroidery thread and acrylic paint. Embroidery provides another layer as it creates thick shadows with organic shapes. De la Torre makes horizontal cuts on the canvas or paper and covers these open areas using color-matching cotton thread.

Bettina Mauel expresses dynamism and sensuality in her paintings. In the many years of her artistic work, she has devoted herself to the singularly inexhaustible theme of perception and impermanence, capturing the fleeting movements of our ever-changing world. Mauel, born in Wuppertal, Germany, is primarily interested in movement sequences in nature, but also in stylized patterns in a wide variety of dynamic processes. Her sensitivity to movement goes so far that she even includes the viewer's eye movement in her pictorial conception. In her brightly colored artworks, the act of painting remains clearly visible.

Darwin Estacio Martinez was born in 1982, in Manzanillo, Cuba. He is currently a professor at the National Fine Arts Academy (San Alejandro) and at the Higher Institute of Arts in Havana. Martinez says of his artwork, “My paintings are intended to embody general ideas through fragments and details that allude symbolically to a chain of actions. My compositions remove the contexts which dictate to the viewer who or what they are seeing and in this allows for the interpretation to be fluid and personal. My work uses a universally understood visual language to convey unfinished stories like still images taken from a movie. This lack of context is also what allows the viewer to connect with the work and apply the narratives that resonate most with them as individuals.”

Atticus Adams grew up in West Virginia, steeped in traditional folk art. Atticus has fond summer memories of screened-in porches and screen doors that practically dissolved the barrier between inside and outside, allowing the warmth and nature to permeate each day. This association continues to resonate in his art. Adams’ sculptural works embody the transformative power of art to create beauty, meaning, and emotional impact from industrial materials. Using mostly aluminum mesh—generally found in screen doors/windows and filters—he creates abstract pieces and installations, which sometimes resemble flowers, clouds, and other natural phenomena. 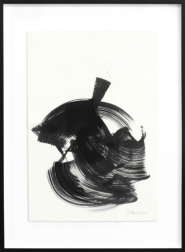 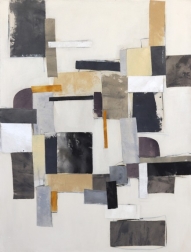 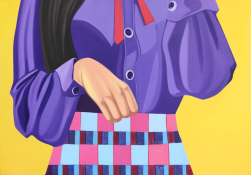 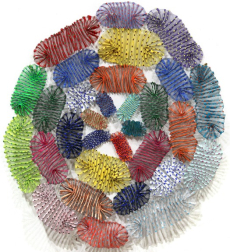