In Uncertainty Principles, contemporary artists drag order out of chaos by drawing chaos out of order. Dynamic lines and forms scatter across the paintings leaving seemingly random brush markings in patterns. Humans are meaning-making machines, and these artists throw entropic colors and lines onto the canvas with the assurance that the audience will make the meaning. In the ebbs and flows of meaning and marking, the artists of Uncertainty Principles spur action, perpetuating the dance between artist and audience.

In her early years, Janette Dye began receiving regular instructions from the world-renowned English painter Harold Riley, which kickstarted her career as a painter. Over the years, her style progressed, leading her to explore abstraction. During her time at art college in Manchester, Dye mainly worked with charcoal where her emphasis was on the 'negative' space. The lack of color emphasized the shape and size of the line and sensibility. After moving to the United States, Dye combined her earlier life experiences from the UK and began her new creative direction here. Balance and simplicity are at the heart of Dye’s work. She is at her boldest when she seduces the viewer with her dynamic composition and color sensitivity to create a unique visual vocabulary.

Sergei Inkatov was born in Baku, Azerbaijan in 1971. In 1987, he entered an art vocational school to study painting before moving to Tver, Russia where he continued his artistic studies. He is currently an active member of the Russian Artists’ Union. His expressionistic artworks are vivid and richly textured with thick brush strokes of dynamic color. Inkatov’s paintings radiate a life of balance and positive energy. Sergei Inkatov’s work is collected and exhibited worldwide, including artworks held in the Narva Museum in Narva, Estonia, Galeria Comas in Barcelona, Spain, and the Russian Art Fund’s Cultural Property collection.

Cuban-American artist Frankie Alfonso creates complex paintings using lively colors and spontaneous, well-balanced compositions. His work is best described as a style of automatic writing where he manipulates simple lines to make complex arrangements of line, color, and shape. His style is a mix of cubism, cartoon animation, surrealism, graffiti, and abstract expressionism where he pushes the boundaries of his art by experimenting with a variety of media, including oil, acrylic, gouache, and spray paint.

Influenced by the New York abstract expressionism of the 1940s and 50s, Los Angeles artist Marc Raphael began teaching himself how to create his first action paintings in the early 90s. After encountering Jackson Pollock’s work for the first time, Raphael was enraptured by the scale, energy, color, and abstraction, awakening his creative spirit. The dynamic interplay between body and creative energy is immensely satisfying for Marc, resulting in his stunning compositions. Raphael says that his work is about the “balance between control and spontaneity, similar to improvisational jazz, and that is why I refer to my paintings as ‘jazz-like improvisations on canvas.”

Sarah Svetlana is an abstract painter who explores the fragmentation of the subject in an ongoing search for home. Her paintings attempt to reconcile her upbringing in the irreconcilable cultures of Soviet Belarus and Immigrant America by drawing roadmaps between two worlds. Always observing and noticing the smallest detail within a detail, her paintings not only suggest hectic movement but the stillness locked in each gesture of that movement. Her work is “rooted somewhere between the insanity of Wassily Kandinsky and the line-certainty of the early 20th century FuturistsThrough the narratives created by a methodical application of color, she delivers an invocation of home—spectral and surreal, but familiar, too.

At the heart of Ilan Leas’ practice is experimentation and overcoming the feeling of failure.  Though he began with pen and ink drawings, he has evolved exploring other media such as painting on unconventional surfaces. He uses graffiti-like strokes and harsh angles to create the organized chaos of each drawing. Leas’s work relies on his subconscious and he does not plan any of his drawings beforehand. He allows the lines to flow freely to create a dynamic space.  He considers his technique “patternmaking without a pattern.”

Much of Ricky Hunt’s work is influenced by Egyptian hieroglyphics, graffiti, and his tumultuous past. After a brief period of drug addiction in the 1980s, he was incarcerated which led to the discovery of his artistic talent and personal transformation through his love of art. Hunt is inspired by philosophy, mathematics, scientific theory, poetry, and astronomy and these themes appear in his work repeatedly.  He describes his chosen imagery as, "Chaotic order pouring from the watery depths of my unconscious.” His mixed media minimalist works reflect how he brought order into the disorder of his earlier existence.

Harrison Gilman's original paintings begin with a layer of fast-paced gestural abstraction. Some of his paintings remain in the purely abstract stage, while others develop into deliberate characters, shapes, and symbols. They are landscapes and portraits of the artist's subconscious. In his artworks, Gilman exposes things buried beneath the surface of his mind. "It’s so easy to get caught up in the material world and all the distractions and what we think we’re feeling and what we should be feeling versus whatever is actually going on." 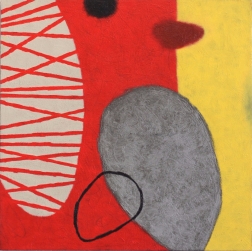 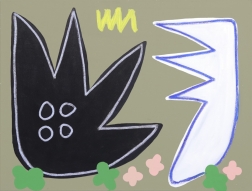 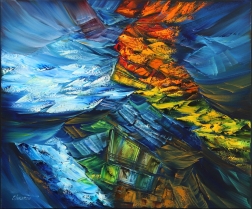 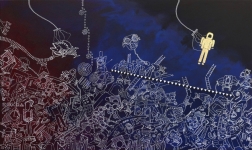 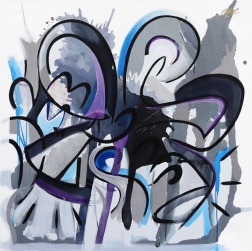 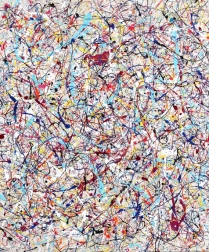 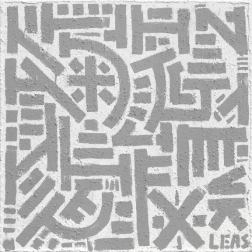 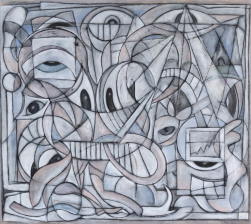 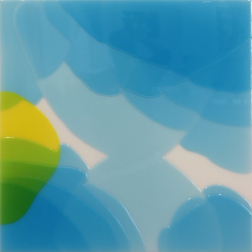