Experimentation with different materials, textures and techniques in each of his paintings has been a point of discovery and a major part of Raul de la Torre’s artwork. In his Fils I Colors series of works, he attempts to find the third dimension through the use of different materials.

This colorful mixed media artwork is painted with acrylic on paper. After painting, the artist cuts holes in the paper which he embroiders over with the exact color thread. This artwork is not framed. This original artwork measures 37 inches high by 30 inches wide. It is framed in a modern white frame. Size and price include frame. Free local Los Angeles delivery. Affordable U.S. and global shipping are available. A certificate of authenticity issued by the art gallery is included.

Initially, he removed paint from the artistic equation by slicing the works, combining canvas and paper with selected materials. Gradually, the slicing gained more importance, a reflection, perhaps, of his increased desire to be more aggressive. Embroidery provides another element as it creates thick shadows with organic shapes. When combined with light, these shapes offer different views of the work to various observers.

The interaction between the artist, gravity, and the paint is important for the final result. The technique attempts to eliminate the absolute imprint of the artist’s hand. This permits the paint to be a major architect of the final result, giving it a life of its own. It results in infinite and timeless color combinations. In many cases, the different layers of color each represent a temporary state of mind, time, and even places and people.

“FILS I COLORS is an attempt to find life, movement and parts that are not static, that change in their interaction with the observer. The different combinations of colors represent different emotions and interpretations for each individual interacting with the works.” – Raul de la Torre

The major motivation for the idea behind his series of city artworks “CIUTATS” was Raul’s city, Barcelona, and it's particular infrastructure and architecture which are unique among the cities of the world and which are easily recognizable. His personal attraction to the great cities of the world and the urban life was a true incentive. In this series he portrays the different aspects of the cities as a human creation with their different levels of physical and social existence.

“Man created the city and in turn the city has molded the actions and ideas of the human race. I have intended to mold the city, to create my city, to put in order the urban chaos in a reduced physical space, Forget that the cities in which we live have been formed with asphalt, cement, human misery, forgotten revolutions, buried bones and transform them into a conglomeration of texture and color put onto the frontier of canvas and paper.” - Raul de la Torre 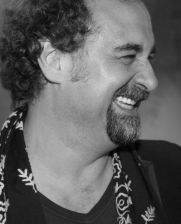 I Too Knitted The Knot Of Contrariety