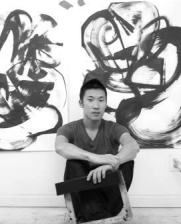 Thomas Hammer was born in 1985 and grew up in Ithaca, New York. He completed his BS at Cornell University. He is known for his motion-filled ink works on paper. His ink works, created with a unique tool that’s a fusion of a squeegee and a brush, are inspired by the spontaneity and vim of post-war action painting, though they employ a unique vocabulary of mark-making. He creates a sense of depth through the variety of textures that vary between smooth and flowing, staccato and rhythmic.

Hammer started his career as an interaction designer at digital agencies in New York City. He titles his artworks after extinct plants, evoking a moment in time that we cannot return to. His abstract works speak to the complexities of contemporary life, with the calligraphic elements offering a nod to a more cosmopolitan and inclusive art world today.

His works have been published in Architectural Digest, CoEval Magazine, and Lines Magazine and have been exhibited internationally and acquired by collectors around the world.