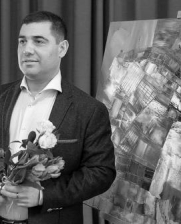 Sergei Inkatov was born in Baku, Azerbaijan in 1971. In 1987, he entered an art school and devoted his time to studying painting. He later moved to Tver, Russia where he continued his artistic studies before finally settling in Estonia (EU). He is an active member of the Estonian Artists Union as well as a member of Mondial Art Academia (France) and an Ambassador from the Academia in Estonia.

Inkatov’s expressionistic oil paintings are vivid and richly textured. They radiate a life of balance and positive energy. His original abstract artworks have been exhibited internationally. Inkatov’s artworks are held in the Narva Museum in Narva, Estonia, the Russian Art Fund’s Cultural Property collection, and Galeria Comas in Barcelona, Spain. In 2011, Sergei Inkatov was highlighted as one of Tallinn’s outstanding artists as part of the city’s winning bid for the EU’s annual European Capital of Culture title.